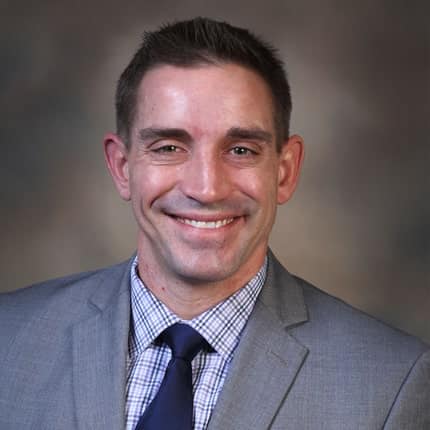 Dr. Metzger graduated from Rush University Medical School in 2007, and completed his Orthopedic Surgery training at Naval Medical Center San Diego in 2012. Dr. Metzger was a staff Orthopedic Surgeon in the United States Navy for 8 years including tours in Okinawa, Japan, Great Lakes, Illinois and a deployment to Kandahar, Afghanistan before joining Orthopedic Specialists in 2020. Dr. Metzger is a fellow of the American Academy of Orthopedic Surgeons and a member of The Arthroscopy Association of North America. He has teaching experience as a professor of surgery at Rosalind Franklin University and also instructs military orthopedic surgeons on battlefield surgery techniques. Dr. Metzger covers the spectrum of general orthopedic care; his areas of interest include arthroscopy of the shoulder and knee, joint replacement surgery, and orthopedic trauma. Dr. Metzger is married to Dr. Shannon Metzger (pediatrician) and they have four children. He enjoys traveling with his family and competing in triathlons.